Tacet(i) is focusing on the creation of new compositions from both local and international composers, artists, as well as new works with elements of music technology, improvisatory and interdisciplinary. The ensemble consists of 14 Thai musicians, our primary members are living in Thailand as well as abroad in several countries such as China, Switzerland, the Netherlands, Germany, United Kingdom and the United States. The primary members include:

Moreover, Tacet(i) is often collaborated with guest musicians in Thailand to extend the format of ensemble as Sinfonietta and Chamber Orchestra. Please see below our Tacet(i) guests member: 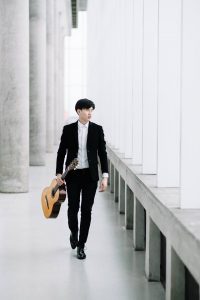 Apart from the classical side, he also interests and dedicates himself to contemporary music which he explores several musical ideas for his performance such as sound, time, space, multi-sonic cultures, and cross-modal relations. Recently, Noppakorn conducts research on a topic of “Multi-sensory sonic experiences” in cooperating with an external mentor, Charles Michel, a former chef in residence at the Experimental Psychology Department, Oxford University. 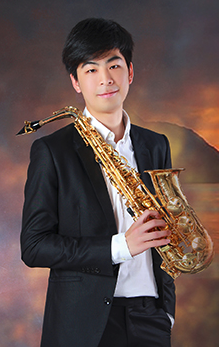 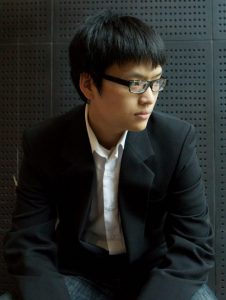 Christhatai is currently a professor of Clarinet at Zhaoqing University, College of Music in Zhaoqing, China. And a member of Beijing Contemporary Soloists. In 2016 She received her Master of Arts Degree from Chulalongkorn University, Bangkok, Thailand where she studied with Dr. Yos Vaneesorn. Previously,  she lived in Paris, France for 3 years where she received a certificate of performance from Conservatoire à Rayonnement régional de Versailles. She studied with Mr. Philippe Cuper from 2011-2014 and was the recipient of a scholarship. Also in her time in Paris she studied Bass Clarinet at Conservatoire à Rayonnement Départmental Marcel Dadi de Créteil with Mr, Philippe Olivier Devaux. Her undergraduate degree was from Mahidol University, College of Music where she received a full scholarship and graduated with first-class honours. Her professor was Cassandra Fox-Percival. Christhatai has received many scholarships, awards and guest artist invitations over the years. She is an Artist of the Triebert France Ligature 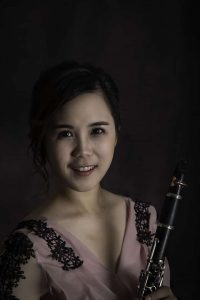 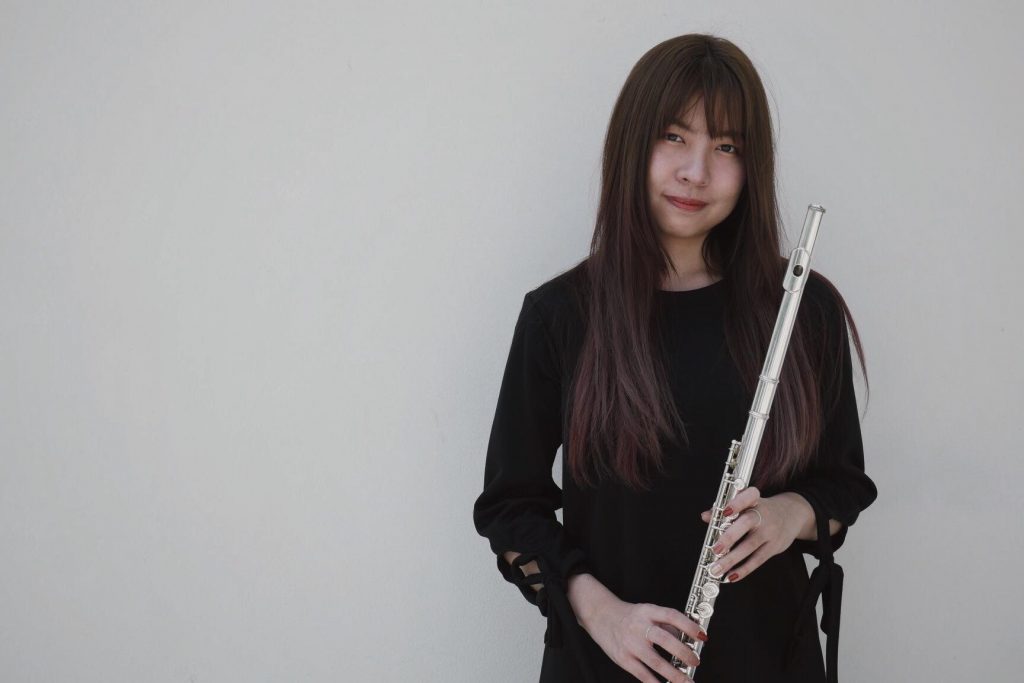 Phataporn Preechanon was born on March 4, 1997 in Bangkok, Thailand. She started playing piano when she was 11 years old. Her first competition was Yamaha Thailand Music Festival 2010: Classical violin with piano, Age not over 15 years; and won the first prize. She later found herself interested in the sounds of wind instruments and she was admitted to the Young Artist Music Program at the College of Music, Mahidol University with Agrita Lakute. She received 2 years scholarship. She has several chances to play with many ensembles. She graduated from Princess Galyani Vadhana Institute of Music where she studied flute with Kalaya Phongsathorn. she has participated in many musical activities in Thailand and abroad, such as: PGVIM Exchange Project in SEOUL 2017; Chamber Concert at Singapore Symposium; SNU International Music Camp 2018 in South Korea.

Siravith Kongbandalsuk the trombonist from Thailand, graduated in Master of Music from Conservatorium Maastricht (Netherlands) after completing his Bachelor degree from College of Music, Mahidol University (Thailand). Siravith has been awarded in music competition such as Ian Bousfield tenor trombone competition from British Trombone Society (UK) and Svirel International Music Competition in Slovenia. He has been performed at Kultur Kontakt Austria in 2017 and Asian Composer League in 2015. As interested in ensemble chamber playing, he has been performed in many ensemble such as Bandung Philharmonic Orchestra, Thailand Philharmonic Orchestra, Princess Galyani Vadhana Youth Orchestra, Siam Sinfonietta and Southeast Asian Wind Ensemble (2010). 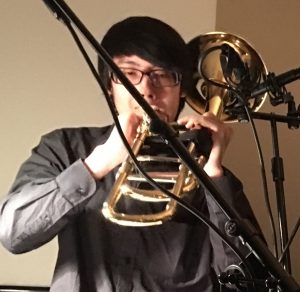 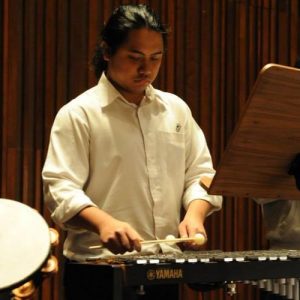 Tapanatt Kiatpaibulkit started playing violin when he was 13 with Worapong Aue-Yok at Assumption College, Bangkok, where was the concert-master, Assumption College String Orchestra. He graduated from the College of Music, Mahidol University in 2016 where he studied major viola performance with Juris Madrevich, minor harp, theory, composition and conducting. In 2010, he went to France as an exchange student and studied violin with Madame Beatrice Broyer at Consevatoire Municipal de Musique, de Danse et d’Art Dramatique in Salon-de-Provence. In 2014, he also participated in the International Summer Course for New Music at Darmstadt, Germany, with Anothai Nitibhon and Peter Veale. Mr. Tapanatt also performed with Tacet(i) at Thailand International Composition Festival 2016 and 2017 and various contemporary music concerts. Tapanatt was member of Princess Galyani Vadhana Institute of Music Youth Orchestra (2013 – 2016) and now he is a member of Siam Sinfonietta and Siam Philhamonic Orchestra 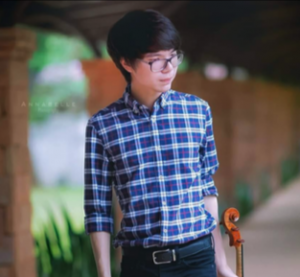 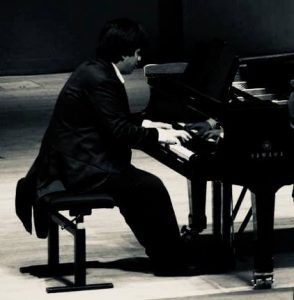 Kerksakul started his piano studies at age of 11. He continued to study with Ruetaitip Patricia Bhasuk at Dr.Sax School of Music when he was 15. In 2007, he was accepted to participate in pre-college program at College of Music, Mahidol University. His piano mentors are Sebastien Koch, Dr. Noppanand Chanorathaikul, Dr. Wen-Hui Lily-Lin and Dr.Pornphan Banternghansa. He received many awards and honors such as Second prize, gold medal by SETTRADE Competition in August 2012, His debut as a Guest soloist in “Thai Telented plays Rachmaninoff” Concert with Thailand Philharmonic Orchestra in July 2013. Presently, He works as a freelance collaborative pianist. Had accompany experience with many instruments including Woodwinds, Strings and Brass.

A former percussionist and a self taught technician, Thanapat is one of emerging visual/electronic artists in Thailand. Graduated in Media and Communication from Mahidol University International College in 2020, Thanapat then continues to create multimedia art as a synthesis artist by joining the multimedia-electro performing group, The Face Shield band with Dr. Piyawat Louilarpprasert and Mr. Rittichut Phetmunin. Thanapat was one of the top students of Dr.Jack Picone a several award-winning and renowned documentary photographer. His electronic music and sound artwork amalgamate elements between visual art, computerization, analog technology and sound-visual integration in order to explore the body and structure of the composition. Recently, his previous work set, “Caged/Uncaged” was exhibited at Bangkok Art and Culture Centre (BACC) with the Face Shield. His recent works are including the “Chamber Of Null” (an interactive Exhibition), The Face shield Vol.1: Streaming Performance (multimedia and sound performance), The Face Shield Vol. 2: Bangkok to Bogota (Telematic Performance) and The Face Shield Vol. 3: the Burning Symphony (Short Film). He is recently a 13th member of the Tacet(i) Ensemble. 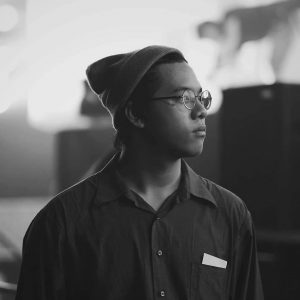 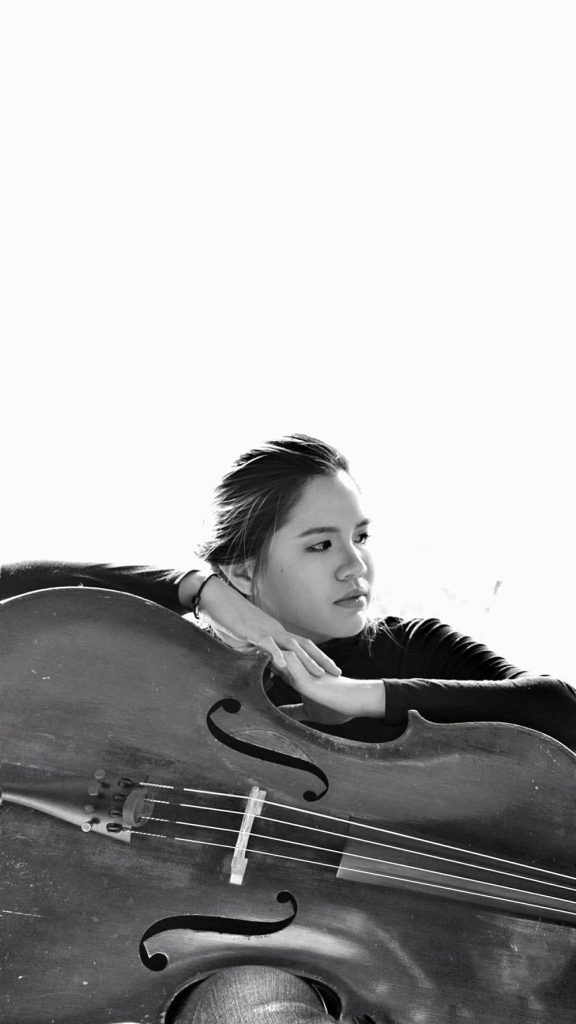 Guntiga Comenaphatt was born in 1992 in Chiang Mai, Thailand. She started to play cello at the age of 11 years old with Assist. Prof. Sompong Wongdee. In 2007, she has studied with Mr. Juris Lakutis at College of Music, Mahidol University in Pre-College Program and graduated in major of western music; she continued to study in undergraduate programmed in Classical Music Performance at the College of Music, Mahidol University majoring in Cello. In her last year of undergraduate at Mahidol University, she had the opportunity to play piano trio with Sonore Piano Trio with a violinist and a pianist who had already graduated from Mahidol University, studying with Prof. Arens Rolf-Dieter and Prof. Paris Paraschoudis. At the same time, she was playing in 1st chair cellist in Alisore Chamber Music Orchestra coach by Prof. Stefanie Waegner. After graduating from College of Music, Mahidol University with Bachelors of Music degree, she decided to continue to study in master degree in Music Performance and Pedagogy Program and graduated in May 2018. While she studying, she also expands her music playing experience with different kinds of music as contemporary music, which she has had an opportunity to be a cellist in Tacet(i) Ensemble, played for the participation in Young Thai Artist award (2017-2018) and Thailand International Composition Festival (2013-2018).

Saksilpa Srisukson was born in 1998. He started playing violin when he was 7 with Natnucha Sasipurana. Later on, he played the viola under the supervision of Thosaporn Pothong. Saksilpa was a member of Princess Galyani Vadhana Institute of Music Youth Orchestra (PYO) during the first season in 2013. He also participated in the 47th Darmstadt New Music Festival 2014 at Darmstadt with Anothai Nitibhon and Peter Veale. He has also been awarded  the 2rd prize as a violist for Melodio Piano Quartet in Princess Galyani Vadhana International Ensemble Competition 2015. He has also performed in various concerts,  musicals and recitals, with genres ranging from contemporary music to mariachi. Aside from music, he has a wide interest including philosophy, mathematics and physics and is currently studying theoretical physics at Chulalongkorn University. 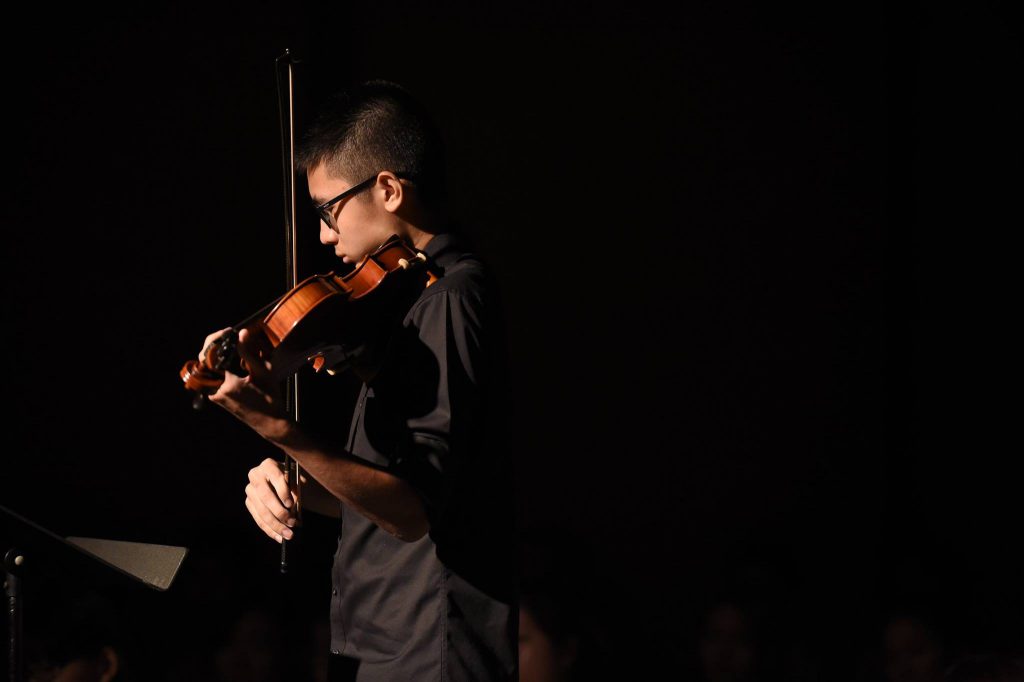 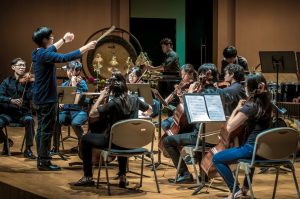 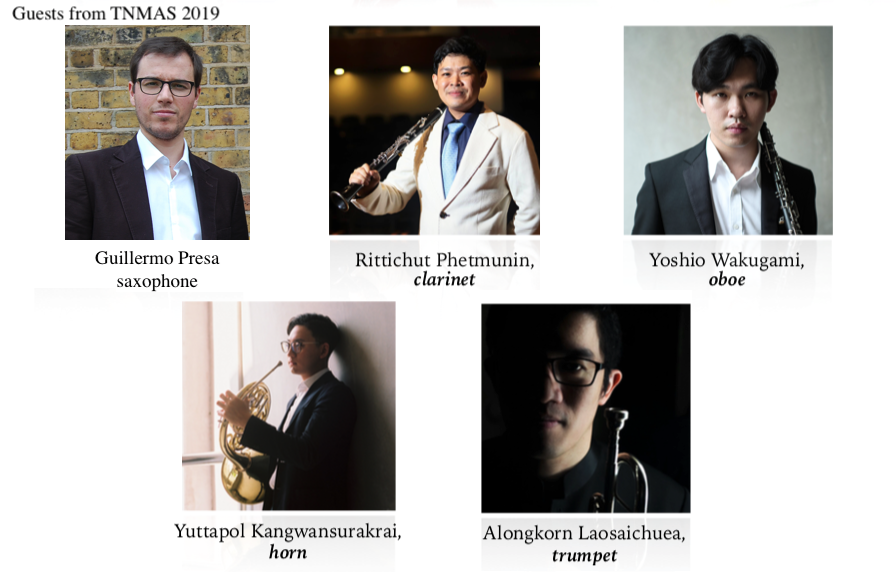 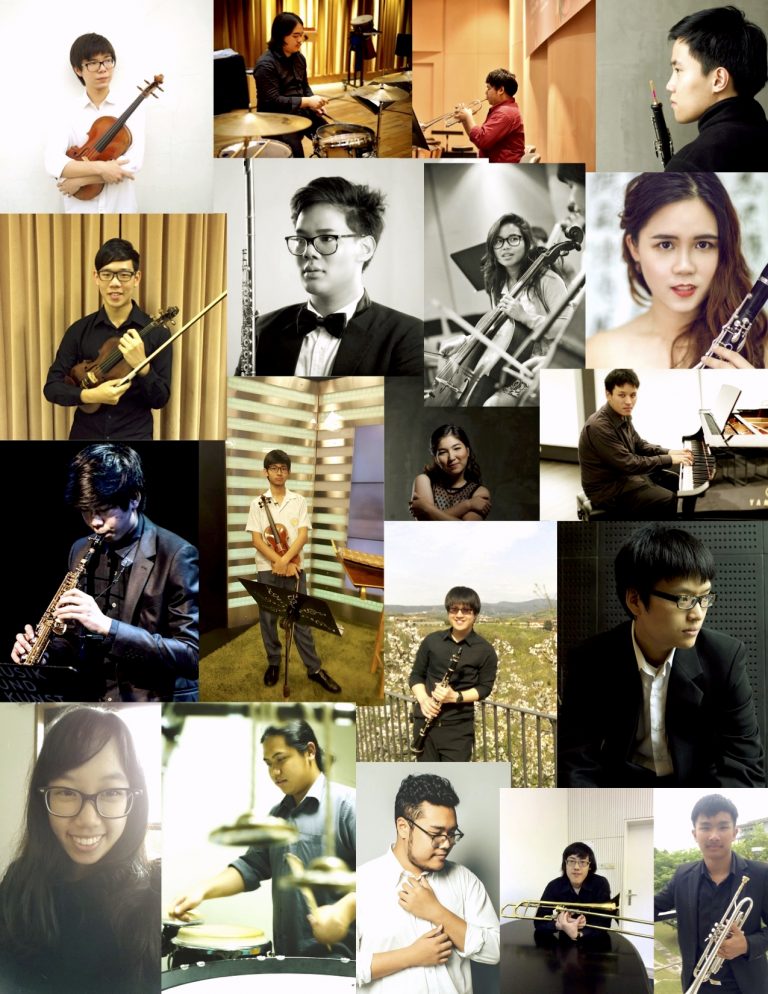